A Ghostly Time At My New Jewelry Making Class

January 13, 2012
Well, I finally started on one of my yearly twelve goals last night by attending a beginning metals/jewelry making class.  It was held at the Columbus Cultural Arts Center, a castle like building in downtown Columbus, OH.  The building traces its roots back to 1861 where it became one of the first Ohio State Arsenals, designed specifically for the purpose of storing arms. The inside of the building has high ceilings and the classroom floors are all concrete.   In the particular room I was in, all the floors were sloped and we were told that the room used to be a stable at one time – really cool right! We were also told by the instructor that the place is haunted.  This piqued my interest so I looked it up on-line and found out about Esther!

Many patrons of the Arts Center have seen the “bedraggled visage of a woman in nineteenth century clothes through the narrow windows of the pottery room. She sometimes appears among the tables and pottery wheels inside the room--sometimes only her top half, sometimes with her face completely obscured.

No one is sure if Esther is the ghost's real name, but it's as good as any considering local history. A woman named Esther Foster was put to death alongside James Clark on February 9, 1844, not far from Arts Center. Both had been found guilty of prison murders, Clark for killing a prison guard with an axe, Foster for doing another female inmate in with a fire shovel. This was the era of public hangings, and the spectacle of a double execution involving a woman (a relative rarity) was enough to bring spectators in from all the surrounding towns. The crowd was so large and unruly that a man was trampled to death by a horse. Is "Esther" really Esther Foster, unable to leave the area where she was put to death before her time?”

There happens to be one more ghost at the Columbus Cultural Arts Center known just as the presence in the basement. If you take the elevator down to the cellar of the building to get lunch from one of the vending machines, you might feel the sensation that you're not alone or that you are being watched from one of the tunnels nearby.

All I can say is that I’m bringing my own drinks, you won’t catch me in the basement anytime soon!

As a side note, the Columbus Cultural Arts Center has so many classes to choose from.  I have lived in Columbus most of my life and I had not heard of it until recently.  Guess it’s about time I get cultured!  You can choose from ceramics, pottery, clay sculpturing, bronze casting, stone carving, drawing, painting, printmaking, surface design, weaving, dying, jewelry making, copper enameling, and so much more.

More to come next week on my jewelry making adventures! 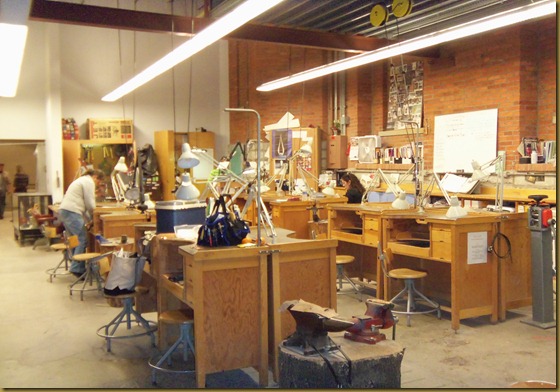 ElleSee said…
That sounds like fun! I hope you learn some really neat ways to work with jewelry. I would also be bringing my own food...or hoping that someone would make the trip with me into the basement :)
January 13, 2012 at 5:01 PM

Tam said…
Thanks Elle! When the instructor told us about the "ghost" I thought she was kidding..until I came home and looked it up on the internet :)
January 14, 2012 at 9:49 AM