January 16, 2012
Ohio’s own Annie Oakley's most famous trick was being able to repeatedly split a playing card, edge-on, and put several more holes in it before it could touch the ground, all while using a .22 caliber rifle at 90 feet!  Can you imagine that?

As a female, have you ever shot a gun?  I have.  For three years, I was a rifle and pistol range instructor in the US Marine Corps.  How in the world did I ever get that assignment?  Well, by being a good shot I guess :)

Of all the talents a female could possess, I have to be good at target shooting??  I can honestly say that it is a natural talent and one of the few I have discovered to date.  I’m sure I have more, just trying to figure out what they are.  The first time I ever “qualified” on the rifle range, I scored high enough to be classified as an expert (my highest score ever was 248 out of a possible 250 points).  I was immediately snatched up to become an instructor.  I started out on the rifle range, teaching Marines to qualify with an M-16 rifle.  I then moved over to the pistol range and taught officers to shoot 9mm pistols.

As I continued to get better, I was asked to join the Marine Corps rifle and pistol team where I shot competitively in various competitions at military installations and in the state of Nevada.  If only I had realized how cool that really was at the time.  I look back now and wonder what could have been….if I had pursued it more.  Maybe I could have trained for the Olympics or something, or a modern day Annie Oakley of sorts.

Anyways, fast forward to present day.  For my birthday last year, I asked my husband to go to the shooting range with me.  I wanted to see if I still had it.  Besides, he was in that “other branch” of the military (the Army) and thought he could out shoot me and so it became a little friendly competition!

Let’s just say – you never lose it.  Take a look at my shot pattern! 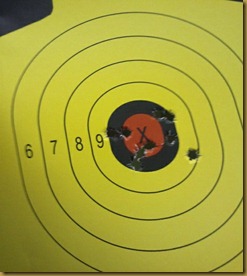 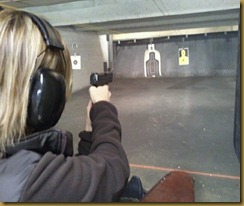 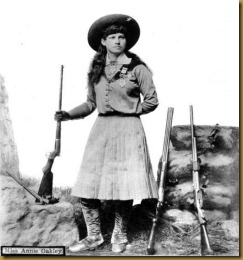 Now it's your turn, go out and try something new this week or this month!  Have fun.