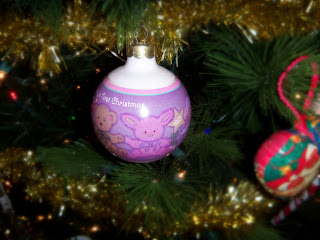 I have two daughters who are now 18 and 21 years old. You know how it is with the first child, you keep up with the “Baby’s First” book with their first words and first steps. When baby number two comes along, you’re a little less organized and start slipping up on keeping track of all those firsts.


It just so happens that at some point, for my first daughter, I ended up with not one, but two Baby’s First Christmas Hallmark tree ornaments. Somehow, daughter number two never received such an ornament. Each year as she got older and would decorate the tree, she would ask, “Mom, where’s my Baby’s First Christmas ornament”? I would say – not sure what happened honey. For a few years that seemed to work, but by the time she was 10 years old, she was really mad about the whole situation :)

When I realized that she really felt slighted about it, I started searching the internet for a Baby’s First Christmas 1993 ornament. I thought for sure I could find one on Ebay, but no luck. I continued to search. Lo and behold, I finally found a company that carried past years Hallmark tree ornaments and ordered one – 3 days before Christmas! I had no expectations of receiving it before Christmas, but was OK with it. I figured that once I received it in the mail, I would just save it for the following year.

Christmas morning finally arrived that year and we were all busy opening gifts. About half way through opening presents, the door bell rang. I thought boy, Grandma is early this year! I walked over to the door and opened it and to my surprise, it was the UPS guy, on Christmas morning! When he handed me the package and I saw the return address, I knew exactly what it was; Baby’s First Christmas 1993 had finally arrived. I turned around and handed the package to Kaitlyn. I couldn’t wait for her to open it as she had no idea why the UPS guy was at our house that Christmas morning. As she opened the package and realized that she was finally getting the ornament that had been missing all these years, she was smiles from ear to ear. I truly believe that little $15 ornament was the most important gift she received that year. Somehow I had forgotten to get this important first ornament, but in the end it gave us a Christmas memory that will last a life time.